Ep. 30: The Man Behind the Sierra Legacy

Pile of Scrap Ep. 30: The Man Behind the Sierra Legacy

Sierra founder, Ben Sacco, had a vision for his company: to improve the recycling process with better equipment and share that throughout the World. With John and Philip Sacco at the helm, they have been able fulfill this vision. However, this success wasn’t handed over on a silver platter. Between leading an organized and clean recycling facility to Ben’s philosophy to always “telling the customer the truth,” there’s no surprise that Sierra is a recognized leader in the recycling industry. John and Philip sit down to tell us all about Sierra’s roots and the man behind the legacy.

Pile of Scrap · Ep. 30: The Man Behind the Sierra Legacy 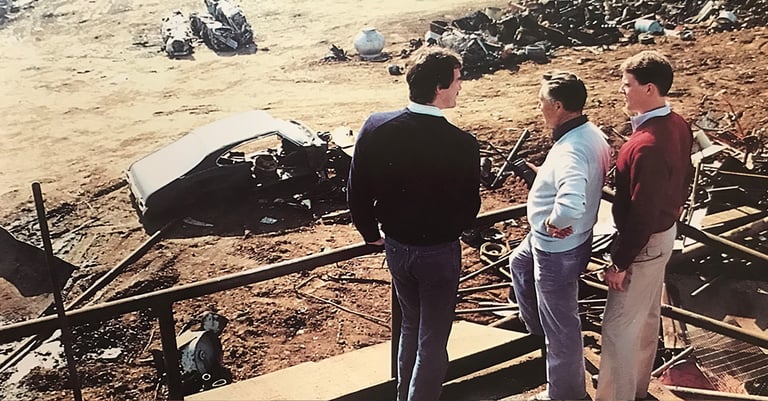 Introduction: The following is an original audio series from Sierra International Machinery; Pile of Scrap with your host, John Sacco.

Ben Sacco: People have to be openminded to see what's available in the marketplace. If they could find a better machine, God bless them, but there isn't. But, now I'm talking as a scrap dealer, not as a machinery salesman. Look, if there was a better piece of equipment, I would use it, but that's not the case. We give them all the assistance in the world. It's just like a big family, really. We – we service our people and we don't overcharge them.

John Sacco: So, the legacy is 60 years of Sierra Recycling Demolition.

John Sacco: I always say, when I talk to people in the scrap industry, the first piece of equipment I ever operated was a broom, but that broom was in the bag company and then once in a while, my dad would let me come in over to the metal room and sweep up.

Philip Sacco: I became a sweeper and then I graduated into a metal grader. Uh, in the early seventies after school, I would come down to work. He picked me up from school. I've worked every summer since 1969 until I became a full-time employee in 1979, February 9th.

John Sacco: But, for the most part, as a kid growing up, it was always the bag company. And until, um, ‘til I got out of college. And then when I got out of college in 1984, uh, the scrap company had become probably the more profitable part of the business.

Philip Sacco: We were taking something that was a discarded by an industry and turned it into a usable product. And so, people who had household metals, industrial metals from their processes, uh, needed a place. And, we were one of the only places in Bakersfield that they could go to. Otherwise, they had to go to a landfill and that was wasteful. And, my father had – was a visionary where he says, “Well, that's not good for the environment. That’s – doesn't make sense, bring it here.” We have the ability to recycle it and turn it back into new metal. So, it was unnatural for my father.

John Sacco: So, my dad would get me and drive around in our scrap yard. And, we had auto parts dismantling and start teaching me and showing me more. And, I always felt at a disadvantage because I didn't really know much about metals. I didn't know much about copper, and aluminum, and the different grades. But, uh, my dad always said, “Don't worry about that. You just got to understand how to manage the place. You got to understand that you gotta be organized.” And, my dad developed the nickname “Mr. Clean” and “Mr. Clean” was because my dad was super organized and he was the guy whose scrap yard back in the days, in the sixties and seventies, was always most organized. Well, as things developed over the years, we started paving our scrap yard. We were one of the first companies in the United States to pave the scrap yard. Look, I've traveled all over the U.S. selling shears, and balers, and two-ram balers. There's still a lot of dirt yards out there. And, all these years later, I mean, we are the state-of-the-art scrap yard with stormwater recovery, we don't have any dirt. You know, back to his nickname of “Mr. Clean.” It clearly shows I have many customers who come to Sierra, uh, throughout the year and you always kind of get the same thing, “Wow. This is one of the cleanest scrap yards I've ever been in.” I go, “Well, that's my dad's legacy.”

Philip Sacco: To continue what my father's vision was, is always to be efficient. He couldn't stand someone picking up a piece of metal and putting it in a piece of equipment that took long time and was ineffective to process. So he was always looking for a better mousetrap to process scrap. So, again, Sierra Recycling was blessed to have Sierra International and using Sierra International technology to develop our processes, to be a more efficient, more profitable company… And, more safe. So my father's vision was always to improve the process with equipment and that was it.

John Sacco: But, probably the most… One of the funny stories about my dad is here's a guy who fought for this country in World War II. An immigrant. Came to this country in 1935, built this company from scratch with his own hands and hard work. And my dad liked to smoke cigarettes. He smoked cigarettes all his life, but in California, there was a law passed where you couldn't smoke in the office. And, that absolutely drove my dad crazy that this was his company he built. And, some government official was telling my dad, you can't smoke in your own office. So, that drove my dad to go outside to smoke. And, so we got him a golf cart and for a whole bunch of years from the eighties, late eighties, nineties until, uh, you know, two months prior to his death where he was here every day, he would be in his golf cart, he'd smoke the cigarettes, he'd drive around and get on the employees who are doing this wrong and make sure they're doing this and doing that. But my dad was always hands-on, always in this yard.

Philip Sacco: Dad was a world traveler. He introduced us to traveling the world and living abroad in Italy as well as traveling throughout the world, which opened up opportunities, uh, to create markets for Sierra Recycling and now Sierra International, which are a worldwide company. So, this is an old snapshot of 1971 of the countries that we were doing business in. But, today in 2019, the whole world has got our blueprint on it now. Um, and that was my father's vision to be worldwide, just not regional and not just in one country in Europe or one country in Africa or Asia. Um, he wanted this to be in every country.

John: Here at Sierra, basically based on my father's visions. You know, we're second generation, there's many scrapyards who are third, fourth, and even fifth generations who are out there today and they understand this – what it is to be a generational business. And you take the best of what you learned from, uh, the people before you, and you apply it and you do the best you can. And, I think that's the success this year. We have a great team and that's all based on my father's, you know, his vision, always wanting to develop better equipment, have the most efficient equipment, but that's the vision of my father, of how he wanted us to be the most efficient, clean, organized yard. And, that's really what creates the success we have here at Sierra today.